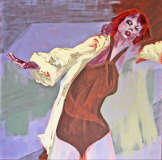 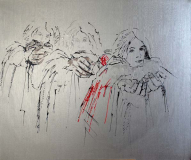 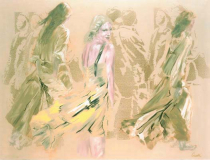 Peter Cerutti is an internationally recognized physician-scientist. For his contributions to our current understanding of cancer and ageing, he has been awarded prestigious international prizes. Interrupting his scientific career, Cerutti followed his second vocation, re-directing his creative energy to painting after having attended the "Beaux Arts "'and "Arts Décoratifs" schools of art in Paris.

Cerutti's subject matter is the timeless form of nature and, in particular, of the human form. His multifaceted vision looks into the 21st century from the perspective of today's complexities and promises. His paintings uniquely express the emotions of the life of today. He achieves this by the masterful use of texture, color and form.

The Arts of the 20th century have been strongly influenced by progress in the physical and medical sciences. In particular, the importance of the subconscious layers of our mind has been recognized by Freud, Jung and others. In artistic circles this has resulted in the notion that the automatic expression of the subconscious should result in revolutionary "modern" works.

However, only few artists have succeeded in creating such works of genuine "art brut" (primitive art). Indeed, I question the concept that artistic emotions are more readily communicated by circumventing the conscious mind. How, otherwise, could we explain the lasting impact of the traditional work of great painters of the past centuries ? In my work, I attempt to express the spirit of today ("Zeitgeist"). I strive to communicate fundamental feelings and laws of nature by organizing basic patterns of color and form into the figurative contents of my paintings.


General Information on the net